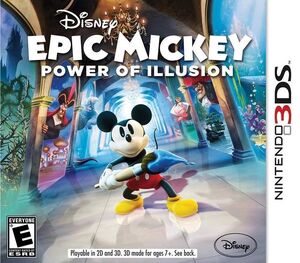 Epic Mickey: Power of Illusion is a platforming video game for the Nintendo 3DS. The game was first rumored to be coming as a companion title to Epic Mickey 2: The Power of Two on home consoles by the French Nintendo Magazine, and was later confirmed in the April 2012 issue of Nintendo Power to be a follow-up to Castle of Illusion starring Mickey Mouse on the SEGA Genesis/Mega Drive. [1] [2]

Developed by Dreamrift and published by Disney Interactive Studios, it was released November 18, 2012 in North America and will be released November 23 in Europe, and is the first third-party title available on both at retail and on the Nintendo eShop. [3] [4] [5] [6]

Power of Illusion is a 2D platformer that features hand-drawn sprites and scrolling backgrounds. Within the game, the player controls Mickey as they move from level to level, each of which is based on a different Disney franchise, while using the stylus to draw things into existence such as cannons, cliffs, and platforms. The more precisely the items are drawn, the more beneficial they will be. [7] 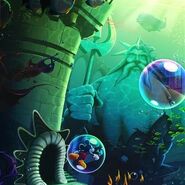 Artwork
Add a photo to this gallery 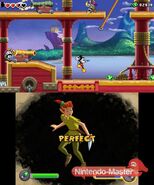 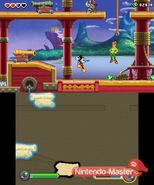 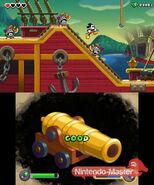 Retrieved from "https://nintendo3ds.fandom.com/wiki/Epic_Mickey:_Power_of_Illusion?oldid=12949"
Community content is available under CC-BY-SA unless otherwise noted.