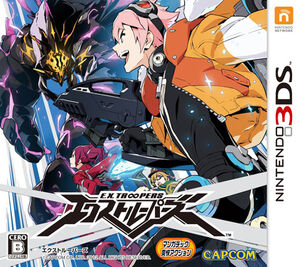 E.X. Troopers is an upcoming action-shooter game for the Nintendo 3DS. A spin-off of the Lost Planet series, it is being developed and published by Capcom and will be released November 22, 2012 in Japan. [1]

The game will follow the main character Bren Turner and deal with the story of the fight between snow pirates and Akrid aliens on the planet EDN-3rd. [2]

Retrieved from "https://nintendo3ds.fandom.com/wiki/E.X._Troopers?oldid=12592"
Community content is available under CC-BY-SA unless otherwise noted.