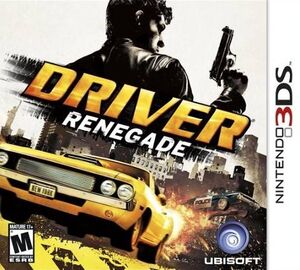 Driver: Renegade, also known as Driver: Renegade 3D is an upcoming video game for the Nintendo 3DS in development by Ubisoft, and is an installment in the Driver series of mission-based driving games, which contain a mixture of action, driving, and third-person shooting.

After years of undercover work on the Force, John Tanner wants to take matters of crime in his own hands, regardless of what the Law dictates. In a corrupt New York City run by criminal mobs, Tanner saves Senator Ballard’s life. He needs help in leading a crusade against Crime. Tanner accepts to clean the city off the record. The game is set between the events of Driver and Driver 2.

The game will include around 20 missions and 50 cars that can be tuned in the garage. There will be also a Rage bar to take down enemy vehicles. The game will also include 7 challenges including Time Attack, Elimination Mode and Road War. [1]

Retrieved from "https://nintendo3ds.fandom.com/wiki/Driver:_Renegade?oldid=4694"
Community content is available under CC-BY-SA unless otherwise noted.