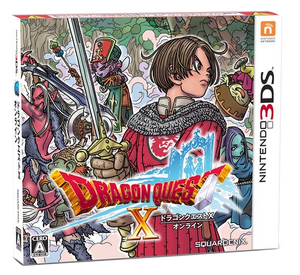 Dragon Quest X is an upcoming massively multiplayer online role-playing game for the Nintendo 3DS. It is the tenth installment in the mainline Dragon Quest series, and the fourth game in the franchise on the system. It uses cloud technology to allow the game to be played on the 3DS, and is thus not running natively on it and therefore not limited by its hardware. Developed and published by Square Enix, the game will be released on September 4, 2014 in Japan. [1]

The game requires the player to be connected to the Internet with their system in order to play. Players will be able to play alongside those on other platforms, including Wii, Wii U, and PC. [2]

Retrieved from "https://nintendo3ds.fandom.com/wiki/Dragon_Quest_X?oldid=18909"
Community content is available under CC-BY-SA unless otherwise noted.