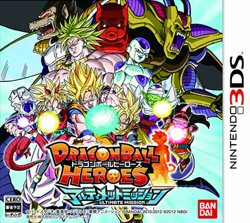 In the Ultimate Mission animation, the Hero is in the real world in front of an arcade game, and he is teleported into the Dragon Ball Heroes universe. There, he meets the Saiyan Heroine and then, Cell and Majin Buu appears. While the Heroine fights with Majin Buu, the Majin Hero and the Namekian Hero take on Cell until Legendary Super Saiyan Broly appears and attacks them. The Saiyan Heroine and the Saiyan Hero take on Broly, but Broly quickly knocks them to the ground. Goku appears and save the kids from Broly's Eraser Cannon. Then, the three heroes turn Super Saiyan and charge Kamehameha waves to struggle with Broly's energy wave.

The game recreates the interface of the Dragon Ball Heroes arcade game via the touch panel. The player assembles a deck of five cards for battles. As the player uses the touch stylus to create a card formation on the bottom screen, the battle unfolds on the top screen. Actions, such as the Charge Impact, are done so that the player can intuitively do them with their hands on the portable device. In the story mode, the player moves around what is called the Ultimate Map and experiences the story from the Saiyan Saga up through Dragon Ball GT, with the most famous scenes from the series recreated for the game. By completing missions, more cards are obtained in the game.

A Dragon Ball game for Nintendo 3DS was first announced at the 2010 E3 by Namco Bandai, saying "Dragon Ball kicks into 3D with all new features and gameplay designed for the Nintendo 3DS hardware.In April 2012, the Namco Bandai website began listing an entry for a Dragon Ball series game on the 3DS.In August 2012, it was revealed that the October 2012 issue of V-Jump andWeekly Shōnen Jump were announcing that Bandai Games was porting its 2010 Dragon Ball Heroes arcade card battle game to the Nintendo 3DS. In November 2012, it was revealed that the release date (2/28) and price of the game (¥5,800) were announced in the January 2013 issue of V-Jump.

Retrieved from "https://nintendo3ds.fandom.com/wiki/Dragon_Ball_Heroes:_Ultimate_Mission?oldid=13274"
Community content is available under CC-BY-SA unless otherwise noted.