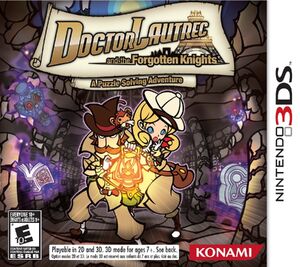 Doctor Lautrec and the Forgotten Knights is an adventure game for the Nintendo 3DS. Developed by Konami, the game was released July 7, 2011, November 24 in Europe, and will be released December 13 in North America. [1] [2] The game is set in late 19th-century Paris, and follows the eponymous protagonist, archaeologist Doctor Lautrec, on his quest for a hidden treasure of the Bourbon dynasty.

The game is designed, written, directed and produced by Zone of the Enders director Noriaki Okamura. It shares many aesthetic and gameplay similarities to Level-5's Professor Layton series of adventure games, which the director has said inspired this game. [3]

Doctor Lautrec and the Forgotten Knights takes place in Paris at the end of the 19th century. The protagonist of the game, the eccentric and mystery-solving archaeologist Doctor Jean-Pierre Lautrec, is a lecturer at the city's Museum of Natural History. Together with his assistant Sophie Coubertin, a university student, he comes into possession of a map that leads to a hidden treasure of Louis XIV of France. On their quest through Paris and the catacombs beneath it, Doctor Lautrec and Sophie are pursued by a crime syndicate and the Knights of the Iron Mask, an order of knights with iron masks and claws. [4] [5] [6] [7]

Retrieved from "https://nintendo3ds.fandom.com/wiki/Doctor_Lautrec_and_the_Forgotten_Knights?oldid=8349"
Community content is available under CC-BY-SA unless otherwise noted.