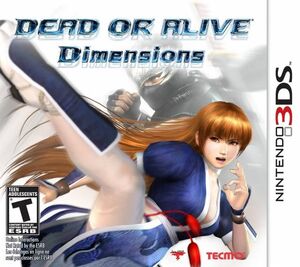 Dead or Alive: Dimensions is a versus-fighter game for the Nintendo 3DS, and the eleventh installment of the Dead or Alive series. Developed by Team Ninja and published by Tecmo Koei, it was released on May 24, 2011, being the first title in the series to be released on a handheld device and a Nintendo system.

The core fighting system of Dimensions is similar to the fast-paced Dead or Alive 4, using some elements from Dead or Alive 3, such as a more strategy-based "counter system". Although the basic gameplay is the same as the rest of the series, each character has a brand new set of techniques. [1]

The game supports both local and online multiplayer, and makes use of the 3DS's StreetPass capabilities by allowing players to exchange gameplay data between consoles, which will then be used to make AIs fight in the same styles and skills of real players, to teach players how to adapt against real opponents on multiplayer.

Dimensions features 26 playable characters, most of which have been playable in the series previous, and each feature their own fighting style, and has the largest roster out of any other Dead or Alive game. Most of the characters have to be unlocked by completing certain tasks in-game before they are playable. The list of characters are:

Shiden can be playable by unlocking all 25 characters, and by going to the character select screen, hold down L+X+A while selecting random and you play as him.

As with previous fighting arenas in Dead or Alive, many of the locations in Dimensions feature "environmental hazard"; obstacals that inflict extra damage to fighters that are thrown or pushed against them. These hazards can range from falls, walls, breakable structures, and even explosives.

The game supports Downloadable Content through SpotPass. All of the content is free, and must be downloaded via the SpotPass feature of the 3DS. There are two types of content to download: weekly "Throwdown Challenges"; similar to ghost data, and daily costumes for the playable fighters to wear in game. Although the costumes are limited to a day, they will be released again later so players can collect the outfits they are missing. o download the content, the player must connect the 3DS to the internet, and then follow on-screen instructions when booting up Dead or Alive: Dimensions to create additional data; an SD Card will be needed to create the additional data. Then in the game, the play must go into Options menu and select "Network". From there, check the settings for “StreetPass”, “Costumes” and “Notifications” are switched to "On" so the data can be received. If the player successfully managed to get the content, a confirmation message will be displayed on the "Mode Select" screen. The new costumes can be selected on the "Costume Select" screen; downloaded costumes which are displayed as "Download". The Throwdown Challanges are playable in "Throwdown", displayed with "SP" to the name of the Challenger, indicating it was received via SpotPass.

Overall, Dimensions has recieved positive reviews from critics. IGN gave Dimensions an overall score of 8.0 out of 10, praising the game for its "solid" gameplay and "beautiful" graphics, but critcized the use of stagnant cutscenes, problems with the effectiveness of the touch screen controls, and stated the overall sound was "fitting, but not spectacular."

Nintendo Power, in issue 267 (May 2011), gave the game a 9/10 rating, saying that the cutscenes were 'well-produced' and 'top-notch.' They also praised the 'fast and furious as ever' gameplay, but warned against the 3D effect, saying "for a game as fast-paced as this one is, I prefer having the better framerate even if that means the visuals aren't as impressive."

games™ Magazine has given Dimensions a positive review on NowGamer, rating the title an overall score of 8.8 out of 10, and stating that it's "not the deepest fighter you'll ever play, but you'll struggle to find something so skillfully designed for its platform"; they gave the graphics an impressive 9.3 out of 10. Compared to the launch title Super Street Fighter IV: 3D Edition, another fighting game for the 3DS, Dimensions favored better; Street Fighter 3D only received a 6.2 from the same publication.

The Official Nintendo Magazine stated that it was overall a very good game, and a great alternative to Super Street Fighter IV 3D, even earning their 'Game of The Month' label.

VideoGamer.com gave the game an average score of 7/10, saying that, in the end, "the Street Pass feature is nice and the controls work well, but the framerate suffers online, and the Chronicle Mode is a narrative mess."

Dead or Alive: Dimensions was one of ten games which were nominated for "Best Fighting Game" in the 2011 Golden Joystick Awards, making it one of only six Nintendo 3DS titles to be nominated for the awards that year.[17] Unfortunately, in the end Dimensions was not given a winning place, losing out to the overall winner Mortal Kombat 9, and the runners-up Marvel vs Capcom 3: Fate of Two Worlds and Super Street Fighter IV: Arcade Edition.[18]Dead or Alive: Dimensions also lost out in GameSpot's "Best Fighter" category for their Best of 2011 Awards GameSpot - "Best of 2011 Award: Best Fighter", and lost against Super Street Fighter IV 3D for the Editor's Choice and People's Choice of "Best Fighter" for the DS and 3DS in IGN's "Best of 2011."

On November 11, 2011, Tecmo Koei released materials from its earnings presentation, showing that, as of that date, Dimensions has sold 310,000 units worldwide.

Due to concerns about Swedish laws on child pornography, Nintendo chose not to distribute Dead or Alive: Dimensions in Sweden, Norway and Denmark. The concerns were raised when a user on the Swedish forum Flashback commented that three underage characters in the game - namely Ayane, Kasumi, and Kokoro, all of whom are aged 16 to 17 - could be photographed from revealing angles; the law in Sweden says that if someone is picturing a girl under the age of eighteen, fictional or not, in a pornographic situation, that accounts for being child pornography.

Although the forum user in question wasn't intending to get the game banned, but to highlight the overprotectivness of the law, the game was reported to the police before it was released, though the evidence was found "lacking." Nevertheless, the game was pulled not just from Sweden but also in Norway and Denmark. Retailers like GAME and GameStop in those countries have removed Dimensions from their websites and have refunded customers that pre-ordered the game.

Following Nintendo's choice to pull Dimensions out of Sweden, when the news reached Australian media, there was a backlash against the game due to the possibility of people taking indecent photographs of the underaged female characters. Australian media publishers reported that the game features these characters in bikinis (although out of the three characters, only Kasumi has a bikini costume avaliable as DLC), and allows players to alter the camera angle for "up skirt shots." Australian media called it an easy way for pedophiles to gain access to child pornography.

Following the media uproar, the Australian Rating Board and Nintendo retracted the game from the market and decided to get the game's PG rating remarked. Nintendo said that the game's rating was a problem caused by THQ, the game's previous Australian publisher, who provided limited information to the ACB, so the rating board couldn't properly rate the title; in Australia, information sent by the publisher determines the rating of video games.

The game was later released and the ACB changed the rating from PG (E10+ equivalent) to M (T equivalent) which recommends the game for mature audiences though any age is still allowed access. The main factors for the new rating change were "online play, violence and sexualized gameplay." Moreover, THQ no longer publishes Dimensions in Australia, with Nintendo of Australia now publishing the title.