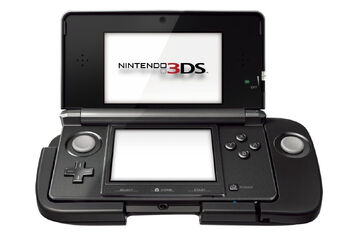 The Circle Pad Pro [1] (Known as Slide Pad Expansion in Japan) is an accessory for the Nintendo 3DS that contains a second circle pad and two additional shoulder buttons. It was released alongside Monster Hunter 3 G in Japan on December 10, 2011, and February 7, 2012 in North America, available exclusively at GameStop for a price of $19.99. [2] [3] It can be purchased in a bundle with Resident Evil: Revelations in Europe and Australia. [4]

The accessory was unveiled in an issue of Japanese magazine Famitsu, and was playable at the Nintendo 3DS Conference 2011 and subsequent Tokyo Game Show. [5] An extra-large version of the device is being sold for the Nintendo 3DS XL directly via Nintendo's own online shop. [6] [7]

The Circle Pad Pro features a second slider pad and three shoulder buttons, used to give the 3DS a more controller-like grip, and to make games such as RPGs or third person shooters more similar to those on consoles control-wise. The accessory requires one AAA battery to run, though one is only included with the original sized Circle Pad Pro. Its battery life lasts for 480 hours (20 days). [8] It is also region free, which means one can use a Circle Pad Pro from another region of the world and it will still work on their 3DS, regardless of region of the system they are using. [9]

It's said by many developers that some of the lack of adoption of the Circle Pad Pro was the CPU overhead required to use it (5%) an example of this is the "new" 3DS having a stronger CPU and the additional buttons and analog slider working, but the CPP not working on the 3DS / 3DS XL is Super Smash Brothers for Nintendo 3DS (at time of posting) [10]

The page in Famitsu confirming its existence.

The Nintendo 3DS system attached to the accessory.

The technical specifications of the accessory.

The Nintendo 3DS system closed while on the Circle Pad Pro.

The "Inside" of the Circle Pad Pro when revealing the hardware.
Add a photo to this gallery

Retrieved from "https://nintendo3ds.fandom.com/wiki/Circle_Pad_Pro?oldid=20259"
Community content is available under CC-BY-SA unless otherwise noted.