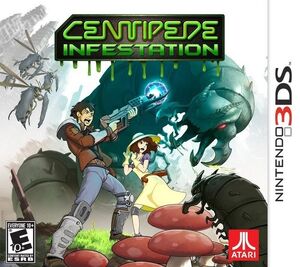 Centipede: Infestation is a game for the Nintendo 3DS developed by WayForward Technologies and published by Atari. A re-imagining of the Centipeded video game franchise, it was released November 1, 2011 and is also available for Wii.

Centipede: Infestation is set in a post-apocalyptic world, and features a "run 'n' gun" shooting style gameplay with a mix of tower-defense style objects. The player's goal is to fight off giant bugs while seeking to use special seeds to bring plant life back to the world.

Retrieved from "https://nintendo3ds.fandom.com/wiki/Centipede:_Infestation?oldid=9356"
Community content is available under CC-BY-SA unless otherwise noted.