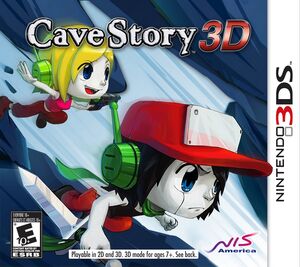 The game maintains its original storyline, plot and features, only with new additions to the game - for example, re-mastering of the original 8-bit soundtracks of the game into fully orchestrated music, and improved 3D graphics.

The game is a typical side-scroller. The player play as Quote who has lost his memory. Players can choose whether to have the original PC version sprites, or the all new 3D models by selecting the preferred on the title screen.[6]

GameShark gave the game a high score of 100, saying "Speaking for myself, I'd rather play through Cave Story again five times than have a second run through the tedious and dated Ocarina of Time, and discovering this game's unique world in a new 3D format has been surprisingly rewarding. It may very well be the 3DS' best game to date." [7] Gameblog gave it the same score: "This 3DS remake of the cult Cave Story fits the bill. It's nicely re-done, all the while keeping what made the original a brilliant game. Perfect gameplay, inspired level-design, mesmerizing musics and enticing plot: no element of this remake can disappoint the fans of good old action platforming "oldschool" games in 2D. A gem of passion you have to play." [8]

Games Radar gave it a 90, stating "Its Pixel's dream realized on a new platform for the masses, and in a form anyone can appreciate." [9] Nintendo Life, who also give it the same score, had this to say "Cave Story has always been an extremely charming and engaging experience, but never before has the game come alive with the type of depth and realism that the 3D visuals and lighting effects provide. When you couple all of this together with the classic high-quality platforming and shooting action of the original, not to mention an amazing remixed soundtrack, you end up with what has to be one of the most impressive video game remakes we've seen in recent years and a title you absolutely should not miss." [10]

IGN gave it an 85: "A brilliant, touching game that is truly special, and that all gamers should make it a point to play." [11] Official Nintendo Magazine UK gave it an 85 too, reason being "[It's a] Mildly disappointing port of an exceptional game that retains its charm." [12] Destructoid was the third to give it an 85, saying "It's one of the best games ever made, in 3D or otherwise." [13] 1UP gave it an 83, stating "The real appeal of Cave Story 3D is a chance to see Pixel's low-rez world rendered in elaborate detail." [14]

GamePro gave it an 80, and advised "If you haven't played Cave Story before and want to see what the fuss is about, or are a die-hard fan who needs to have it in every form possible, you simply can't go wrong with Cave Story 3D." [15] Nintendo Power also gives it an 80: "Taken on its own merits, [Cave Story 3D] is an absolute blast, and if you don't play Cave Story in one form or another, you're missing out on a modern classic."

Game Informer, another giver of this score, has said "The original Cave Story is a great game, and what is being offered here is the same at the core. It looks a bit bland, but it's still fun to play, the music is still great, and the story is still interesting." [16] Nintendo World Report says "Cave Story is game that every gamer needs to play, and if Cave Story 3D is the most viable method of doing that, so be it. However you get your hands on this game, just do it. It's that good." [17] Gamekult gave one of the lowest scores, a 70. [18]

Visual comparisons of the graphics of both versions' stage layouts (original and 3DS) were made, and can be seen below. Concept art was also released, and art for Quote's new revamped appearance for the 3DS version.

Quote's new appearance in the 3D version of the game.
Add a photo to this gallery

Retrieved from "https://nintendo3ds.fandom.com/wiki/Cave_Story_3D?oldid=12158"
Community content is available under CC-BY-SA unless otherwise noted.