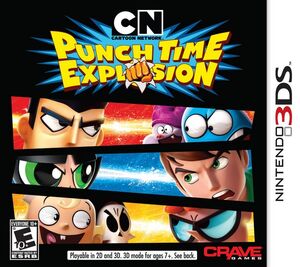 Cartoon Network: Punch Time Explosion is a fighting game for the Nintendo 3DS featuring characters from Cartoon Network animated series, such as Ben 10, Dexter's Laboratory, The Powerpuff Girls, The Marvelous Misadventures of Flapjack and Chowder.

A port of the game for home consoles was released in November, called Cartoon Network: Punch Time Explosion XL. [2]

Up to four players (human or CPU controlled) control a character and fight on a 2D side-scrolling stage. Players may use items that appear randomly to get the fighting edge over their opponent. Additionally, the stage may use set elements in order to take out other players. When players strike one another, glowing orbs will fall out of them. If players collect enough of these orbs, they will fill up their special meter that unleashes a powerful "Punch Time Explosion" attack against their opponents. The title also features a story-mode, in addition to local and online play. [3]

The game received mixed reviews. Nintendo World Report gave it a 75, calling it "A wonderful example of how to make a good Smash Bros. send-up. It's not quite as polished as Nintendo's premier fighting franchise, but it is a fun experience with an entertaining and interesting single-player mode, as well as amusing multiplayer, if you can find the people around to play it." [4]

GamePro gave it a 70, and concluded their review with "But overall, I had fun with Cartoon Network Punch Time Explosion -- and if the 3DS version managed to impress me, I'm officially on watch to see what the upcoming console version of the game is going to look like." [5] Nintendo Power gave it a 70, stating "Punch Time Explosion is not a trendsetter; that's for certain. But with no portable Super Smash Bros. in sight, it's a likeable interpretation that will curb your cravings--or start them anew."

Nintendo Life gave it a 60, reason being "Everything from the story to the moves to the items are ripped straight from Smash Bros., and the pieces just never come together into a similarly quality experience." [6] GameSpot gave it a 55, saying "Punch Time Explosion's ensemble of Cartoon Network characters falls victim to the evil forces of shallowness and frustration." [7]

Game Informer gave it a 48, stating "Punch Time Explosion had a good opportunity to impress 3DS owners hungering for a worthwhile experience following the handheld's weak launch lineup, but it simply falls in line with the other disappointments. Cartoon junkies may love seeing their heroes in action, but those used to Smash Bros. polish will want to pass on this one." IGN gave it a 75, saying "There is the skeleton of a good game in here: a multiplayer-focused Smash Bros clone starring Cartoon Network characters. But it's just too buried under poor controls and a mediocre single player campaign to achieve fun status." [8]