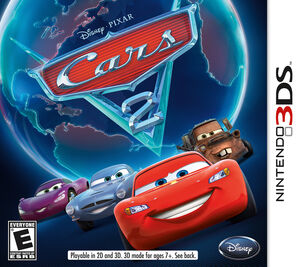 20 different characters are playable, such as Mater, Lightning McQueen and the newly introduced Finn McMissile and Holley Shiftwell. The game supports up to 4 players using multi-card wireless play. Bonus in-game content can be unlocked through communication with nearby Nintendo 3DS owners using StreetPass. [2]

Alike from the movie release, the game recieved mixed to negative reviews. Spazio Games gave it the negative score of 68, saying "Cars 2 is a title that fits the target to which it refers, bestowed with a good gameplay. A shame for the almost complete lack of online features." [3]

Retrieved from "https://nintendo3ds.fandom.com/wiki/Cars_2:_The_Video_Game?oldid=11674"
Community content is available under CC-BY-SA unless otherwise noted.