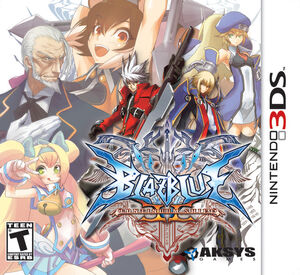 The game contains the complete set of single player features from the original version, such as Arcade, Score Attack, Training, and Story mode, and includes a local multiplayer mode. There is new content created solely for this version, such as extra story material and brand new modes like Legion 1.5 and Abyss Mode. The game also features the full 18 character cast of the original BlazBlue: Continuum Shift, including three DLC characters. The local multiplayer allows up to 4 players to participate in a single session. Two players will fight while the others are spectators. [1]

The game has received mixed reviews.

Nintendo Power gives it an 85, saying it is "one more excellent entry in what's become a fantastic library of brawlers for N3DS." Nintendo Life gives it a plain 80, stating: "Even with the lack of online multiplayer, the enormous amount of unlockable content will keep the brawls going long after the first punch is thrown. Blazblue has finally landed on a Nintendo console, and there's truly no better time to find out what all the fuss is about." [2]

GamePro gave it a 60, saying: "All things considered, Blazblue Continuum Shift II is a serviceable -- though hardly spectacular -- port of a superb fighting game. It's nice to have if you ever feel the odd itch to practice combos while you're waiting at the doctor's office, but there's no way you'd ever choose to play this over the console edition if you had the two in front of you. Let's hope the next Arc fighting game to see release on the 3DS takes the system's functionality (and quirks) into more consideration next time." [3]

IGN gave it a low score of 25, reason being: "The performance and control issues make Continuum Shift II a very disappointing package. If you're more interested in single-player, you might be able to tolerate the slowdown and enjoy BlazBlue's finer points, but I could only recommend doing so if you literally have no other options." [4]

Retrieved from "https://nintendo3ds.fandom.com/wiki/BlazBlue:_Continuum_Shift_II?oldid=6495"
Community content is available under CC-BY-SA unless otherwise noted.