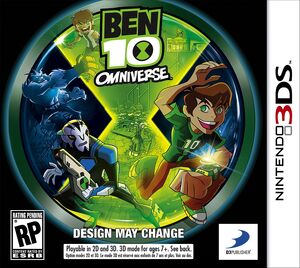 Ben 10: Omniverse is an upcoming video game for Nintendo 3DS based on the Cartoon Network animated series of the same name, and the second Ben 10 on the system after Ben 10: Galactic Racing. It is being developed by 1st Playable Productions and will be published by D3 Publisher. [1]

The game has action-brawler gameplay featuring the new art style inspired from the show. Players will have the power to switch forms and battle as one of 13 playable alien heroes, such as like Bloxx and Gravattack, as they work with either Ben or Rook to defeat the evil plans of a fierce villain, intent on destroying the world.

Retrieved from "https://nintendo3ds.fandom.com/wiki/Ben_10:_Omniverse?oldid=15405"
Community content is available under CC-BY-SA unless otherwise noted.