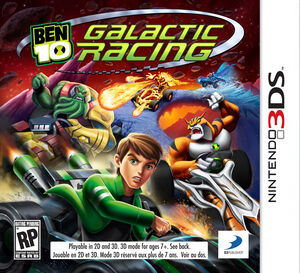 The game has fast-paced racing action set in the Ben 10 universe and based on the hit Cartoon Network show. Players race in over 30 different karts in 25 grand prix tracks spread across 5 environmental planets from the Ben 10 universe. There are 15 characters for players to race as. An "Ultimate" power move unleashes a super charged, race changing boost of speed and power themed to each character's abilities. Drifting and mid-air stunts are also able to be pulled off, and charge up character-specific attacks and defenses. [1]

Retrieved from "https://nintendo3ds.fandom.com/wiki/Ben_10:_Galactic_Racing?oldid=15404"
Community content is available under CC-BY-SA unless otherwise noted.