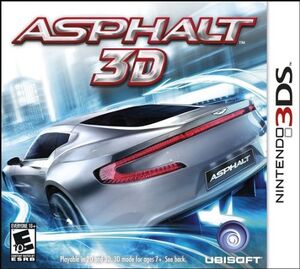 Asphalt 3D, released in Japan as Asphalt 3D: Nitro Racing (アスファルト3D: ナイトロレーシング Asufaruto Surī Dī: Naitoro Rēshingu?), is a racing game for the Nintendo 3DS handheld video game console. It was developed and produced by French video game developers Gameloft and released by Konami and Ubisoft in Japan on March 10, 2011, Europe on March 25, 2011, North America on March 27, 2011, and in Australia on March 31, 2011.

A direct conversion of an Apple iOS game, Asphalt 6: Adrenaline, Asphalt 3D includes of seventeen tracks based on real-time locations and forty licensed sports vehicles. It is one of launch titles for the 3DS, along with eight other games listed by Ubisoft. The game received negative reviews; much of the criticism for the game was directed at poor controls, numerous bugs, its visuals, and choppy framerate.

Asphalt 3D is a racing game, where the player must maneuver an automobile to compete against artificially intelligent drivers on various race tracks. Players earn rewards such as car upgrades and XP points for winning races throughout the game, and reaching higher levels allows them to use better sports cars to unlock.[1]The game features seventeen tracks, which focuses on Asphalt 5 and some on Asphalt 6: Adrenaline, based on real-time locations including San Francisco and Paris, and forty licensed sports cars and motorcycles such as Ferrari, Lamborghini and Ducati.

The game uses eight game modes available such as "Career Mode"; "Vigilante", an elimination mode; and a Need for Speed-inspired "High Speed Chase" mode where a player must outrun police cars,[2]along with a multiplayer option for up to six players using local wireless play.[3]It makes use of the 3DS system's accelerometer, similar to those on the Apple iOS platforms, allowing the player to control the vehicle like a steering wheel.[4]

Asphalt 3D has received negative reviews from critics, currently holding an average score of 46% at GameRankings and 43 at Metacritic, based on 27 and 34 reviews respectively.[5]The game was described by critics as "an absolute joke",[6]"a buggy mess" and "truly horrible"[7]due to "terrible physics, stiff controls and poor graphics", along with frame rate issues and glitches.

IGN's Martin Robinson stated that "a game can't even be bothered to stream its own pre-rendered intro smoothly".[17] Although praising of its "decent car models", GameTrailers noted that it "suffers from choppy performance, lots of pop-in, laughable animations, and tire marks that float above the road in 3D. It's as if it was made merely to look good in screen shots."[16] Justin Towell of GamesRadar felt that the "angular scenery are reminiscent of the N64".[3] Nintendo World Report staff writer Josh Max complained of its lack of tutorial sections and stated that it "does nothing to represent the capabilities of the Nintendo 3DS".[18] In their buyer's guide, NWR writer Matthew Blundon and director Neal Ronaghan stated that "when there are far better racers available, namely Ridge Racer 3D, why waste your money on an inferior product such as Asphalt 3D?"

Retrieved from "https://nintendo3ds.fandom.com/wiki/Asphalt_3D?oldid=15402"
Community content is available under CC-BY-SA unless otherwise noted.