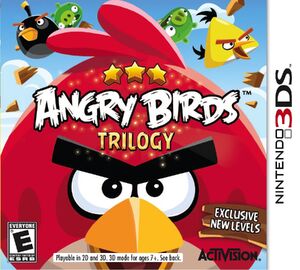 Angry Birds Trilogy is a compilation for the Nintendo 3DS. Developed by Rovio and published by Activision, it contains the first three Angry Birds titles, Angry Birds, Angry Birds Rio, and Angry Birds Seasons, and was released October 16, 2012. [1] [2]

The title was first hinted at in an article on the gaming website Joystiq, where the chief marketing officer of Rovio, Peter Vesterbacka, discussed the latest title in the Angry Birds series, Angry Birds Space, and stated that they'd "have [their] games on the 3DS pretty soon." [3] It was later officially announced as a packaged title in July 2012.

The game retains the series' traditional gameplay of launching birds via slingshot with the intent of eliminating enemies such as pigs by means of hitting them directly or damaging the structures that shelter them. It will also support StreetPass. [4] 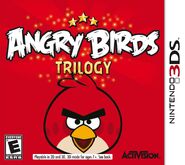 Tentative box art
Add a photo to this gallery

Retrieved from "https://nintendo3ds.fandom.com/wiki/Angry_Birds_Trilogy?oldid=15399"
Community content is available under CC-BY-SA unless otherwise noted.