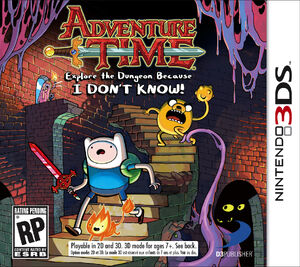 Adventure Time: Explore the Dungeon Because I DON’T KNOW! is an upcoming game for the Nintendo 3DS, and the the sequel to Adventure Time: Hey Ice King! Why’d you steal our garbage?. Developed by Wayforward Technologies and published by D3 Publisher in North America and Bandai Namco Games in Europe, it will be released November 12, 2013. [1]

Players control characters from the series such as Finn, Jake, Marceline, Cinnamon Bun and more to explore the mysteries surrounding a massive Secret Royal Dungeon deep below the Land of Ooo. [2]

As opposed to its predecessor, the game features 3D designs and is played from a top-down perspective. It supports up to four players, who can explore over 100 dungeons. Characters each have their own abilities -- for example, Cinnamon Bun can take more damage than others and Marceline can absorb red projectiles from afar. Each also have an Imagination Meter which can be used to execute special attacks when filled up. [3]

Retrieved from "https://nintendo3ds.fandom.com/wiki/Adventure_Time:_Explore_the_Dungeon_Because_I_DON%E2%80%99T_KNOW!?oldid=16337"
Community content is available under CC-BY-SA unless otherwise noted.