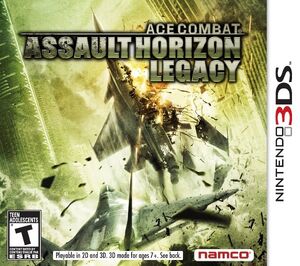 Developed by Project Aces and published by Namco Bandai Games, the game was released November 15, 2011 in North America, December 2 in Europe, and January 12, 2012 in Japan.

First impressions of the game were released by the Official Nintendo Magazine in July 2011 and were also leaked by IGN in the same month.

Retrieved from "https://nintendo3ds.fandom.com/wiki/Ace_Combat:_Assault_Horizon_Legacy?oldid=15396"
Community content is available under CC-BY-SA unless otherwise noted.